Chartres owes its fame to its Marian sanctuary. Is it possible that the first Christian building was built on a site once used for druid worship? In his account of the Gallic Wars, Julius Caesar wrote that Gaulish druids met in an annual gathering on the edge of the territory of the Carnutes. There is no reason to think that this kind of cultural continuity would not have occurred; historically, it has taken place all over the Mediterranean. However, what is clearly fiction is that Fulbert’s Romanesque statue of the Madonna (which was burned during the Revolution) is attributable to the site’s druidic past. In the 14th century the idea came about that it was in fact a druidic statue of the pregnant Virgin (Virgo paritura), and that a cult of the Virgin Mary in Chartres predated the Christian era. 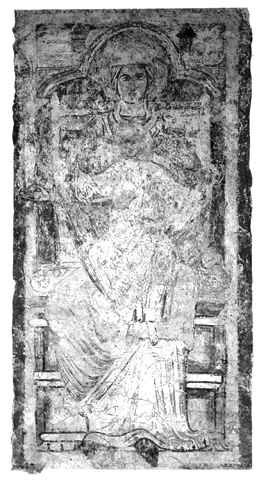 The cult of the Virgin developed as a result of the presence in Chartres of the relic of the Virgin’s tunic. This was in fact a long veil acquired by Charlemagne in Constantinople from empress Irene. The relic was kept for a time in Aix-la-Chapelle until Charles the Bald donated it to Chartres. But why did he part with it? Chartres was part of his territory, and his gift may have been a bid to help the cathedral gain notoriety. The reliquary containing this precious cloth was placed on the cathedral’s high altar. A number of miracles were attributed to this relic, which was credited with protecting the city from its enemies, curing Saint Anthony’s Fire and more. As rumours of the miracles spread, Chartres grew in importance as a place of pilgrimage. By the middle of the 12th century, the devotion of St Bernard and others to the Virgin had become widely established all over the West, with many great Gothic cathedrals being dedicated to Our Lady. This emergence of the Virgin as a key figure of the Christian faith meant that the sanctuaries of which she was the spiritual reference gained greatly in importance. To enable pilgrims to gaze upon the reliquary containing the Veil of the Virgin, a broad ambulatory was built around the choir.

Lowly and sick pilgrims, repentant sinners, burghers and lords, kings of France including King Louis (who made the pilgrimage to Chartres five times), kings of England, princes and prelates and believers from every walk of life came to pray to the figure who had the power to cure them and help them get on in their lives. The pilgrims’ devotion was not limited to the Virgin, but there is not room here to list the countless relics contained in the cathedral’s treasury. By the 11th century (and perhaps even as early as the Carolingian period), a cult had developed surrounding a miraculous well in the crypt, said to be the place where the corpses of the first martyrs were thrown and known as the Well of the Strong Saints. Later, more relics were added in response to an increasing demand for prayer. The oldest relics are those of local saints such as St Leobinus, considered to be the founder of the church in Chartres; his successor Caletricus; Sollemnis, said to have brought about the conversion of Clovis; Betharus, who defended the city against the Burgundians, the martyrs St Caraunus and St Piatus; and St Savinian and St Potentian, evangelists of Gaul. Contemporary saints were also venerated. Bishop John of Salisbury donated blood of Thomas Becket and the knife used in his recent martyrdom. Other relics were brought back from the crusades: a piece of the True Cross in 1120, the head of St Theodore, and the heads of St Anne and St Matthew in 1204 from the Fourth Crusade. Chartres was also where other relics were kept: hair of Mary Magdalene, the hand of St Thomas, stones from the martyrdom of St Stephen, the tooth of St Lawrence, and others besides. It therefore seemed to many that Chartres was filled by the presence of the saints throughout history. Christians of all persuasions and backgrounds came to Chartres to pray before these relics, whose presence was advertised through thousands of images in stained glass and sculptures.