The vast majority of the stained-glass windows of Chartres Cathedral therefore date from the early 13th century. This was a time when the expansion of towns and cities resulted in an increasingly important role of the middle class. Farming and craft technology was becoming ever more sophisticated, generating increasing wealth, and this was above all a time of peace, which guaranteed prosperity and therefore a flourishing of art, which increased people’s pleasure and enjoyment of life. The main concern of the Capetian dynasty was to strengthen the power of the monarchy. One of the major preoccupations of this period was the importance of propagating the influence and identity of Christianity, which was the reason for the crusades in the East and the persecution of the Cathar heretics. These wars kept the lords of the Ile de France region occupied and cemented their growing feeling of solidarity. As far as the Roman Catholic Church was concerned, the building of Chartres Cathedral took place between two important councils, the third Lateran Council of 1179 and the fourth Lateran Council of 1215. These brought far-reaching reforms of the face of the Church, in particular as a result of the clever initiatives of Pope Innocent III. All of these historical factors played a role in the creation of the windows at Chartres and are clearly reflected in their iconography. 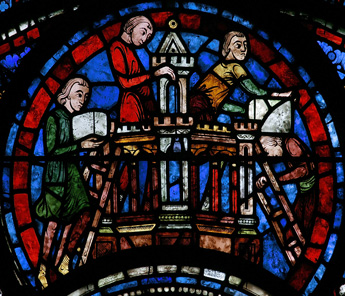 Extend the visit of the site Chartres sanctuary of the World by the free reading of the Letter to the donors and the people impassioned by the cathedral and the history of its restoration! Six pages, rich in unpublished articles and projects.
751cfe4a644a08ccd119885de0a45fd2TTTTTTTTTTTTTTTTTTTTTTT