The architects, carpenters, masons, stone cutters, sculptors and glass artists who worked on the Gothic cathedral would have benefitted from the experience they gained building other churches in the region. They created a building unlike any other in the world, perfectly espousing the architectural tenets of the day and yet displaying an originality that distinguishes it from all others. Chartres Cathedral is at once austere and elegant, vast and severe, luminous and balanced, restrained and audacious.

Its rustic character comes from the quality of the stone used, a limestone extracted from the quarry at Berchères-les-Pierres around ten kilometres from the city. This grey, irregular stone, which is hard to work with precision, gives the building its rough, austere appearance. This was however originally softened by the ochre and white paint used to lighten the colour of the stone and bring out the building’s architectural lines. The cathedral’s proportions are unusual, necessitated by the desire to create a feeling of volume and balance. Its dimensions were dictated by the old Romanesque building, whose central nave was 16 metres wide. This width is quite manageable when it comes to constructing a roof frame but makes creating a balance quite a challenge where stone vaulting is used. This challenge was compounded by the requirement to build high above this narrow width: the vaults in the nave are 37 metres high. The dimensions of the nave meant that sexpartite vaulting was not appropriate and that more effective and elegant quadripartite vaults with a rectangular plan had to be used. This was an innovative solution which had been used experimentally a few years previously at Noyon. A much bigger choir was also built, to accommodate the large number of canons. A vast transept projecting a long way from the nave was constructed to house the processions of the faithful and given more solemnity by the porches built on the ends of the transept arms. 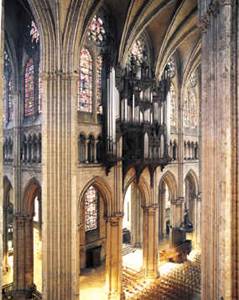 At Chartres, effective ways were found to create luminosity, a preoccupation of the architects of the time. The tribunes habitually built above the nave aisles in earlier basilicas were omitted, enabling the nave to receive direct light through the windows. Gemel windows were inserted, topped by a rose window. These were the largest windows ever attempted and were in themselves a huge project. Using flying buttresses to support the main lateral thrust meant that there was no need to use the old system of several levels of arches, which strengthen the building but repeatedly block out the light. The nave aisles therefore rise in a single volume, letting the light from the windows in the side aisles into the heart of the nave through 14-metre-high arcades.

The quality of the balance is achieved by the relative proportions of the building, with the height of the great arcades being equal to that of the high windows. There is also a balance between the vertical structures that draw the gaze up to the vault in a movement that is barely interrupted by the light capitals adorned with sculpted plants and the long horizontal line of the triforium, an elegant openwork structure that casts areas of shadow onto the walls of the nave. The architects of Chartres Cathedral strived to create an impression of unity that does not in any way result in uniformity, positioning by the great arcades that open on to the side aisles a series of squared-off pillars surrounded by circular colonnettes and circular pillars surrounded by polygonal colonnettes. In this way they alternated the play of shadow and light on the building’s vertical framework, breaking up the monotony of the long nave without interrupting the unity of its structure. The light admitted thus creates a pattern on the walls

Extend the visit of the site Chartres sanctuary of the World by the free reading of the Letter to the donors and the people impassioned by the cathedral and the history of its restoration! Six pages, rich in unpublished articles and projects.
fb225013bd132b4fa8e3d8069e4aeed0""""""""""""""""""""