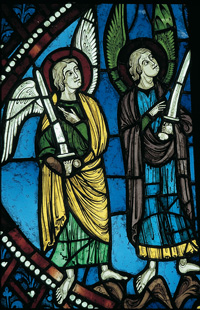 The stained-glass windows can be divided into three categories. The lower windows recount stories of the lives of the saints and narratives taken from Holy Scripture. The upper windows feature figures of the saints presented in monumental fashion. Lastly, the three large rose windows present vast composite pictures: the Last Judgment in the west façade, the Old Covenant on the north side and the Apocalypse on the south side. These three sets of images had different functions related to their location in the cathedral: the monumental figures, designed to be viewed from afar, formed a solemn procession visible to the pilgrims as they filed past; the edifying episodes of the story-telling lower windows are split into a series of small panels designed to instil pious thoughts; while the rose windows in the façades present a whirl of images in a compilation of great moments from history.

The arrangement of the figures and lives of the saints follows a complex order whose logic would have been carefully considered by the learned canons. They were well aware of the traditions dictating the symbolic arrangement of motifs inside churches (for example the themes of death and passion tended to be featured on the north side and the resurrection on the south side, the sunny side associated more with life). They would also have taken into account the requirements of the cult of the relics and the positions of the secondary altars devoted to the different saints. Lastly, they were careful to follow sequences of spiritual associations relating to different categories of saints. The lower windows were designed to be read like a book, starting in the north aisle with Genesis and God’s first covenant with man symbolised by Noah, and ending in the south aisle with the window opposite that recounts the life of St John, who wrote the Apocalypse, the time of the Ultimate Revelation. This sequence culminates in the centre in the axial chapel with the scene of the call of the disciples and therefore the constitution of the Church, the body of Christ.

The deliberate glorification of the living Church is echoed by the parallel glorification of the mystical Church on the upper level. The upper axial window of the apse thus shows the Virgin on the throne of Divine Wisdom, looked upon on each side by cherubs, adoring angels whose function in the Old Covenant was to watch over the Holy Ark. The new Ark of the Covenant is surrounded by those who prefigured her virginity (Moses and the burning bush and Aaron and the flowering rod), announced her coming (Daniel and Jeremy on one side and Ezechiel and David on the other), recognised her messianic authority (St John the Baptist) and served as the cornerstone of the new construction (St Peter).

Extend the visit of the site Chartres sanctuary of the World by the free reading of the Letter to the donors and the people impassioned by the cathedral and the history of its restoration! Six pages, rich in unpublished articles and projects.
535519322aadc017ff78d5e75cdbcf9aQQQQQQQQQQQQQQQQQQQQQQQQQQ