Most of what can be seen of Chartres Cathedral today dates from the first third of the 13th century, but if one looks beyond the Gothic architecture it is possible to discern traces of the different periods that have marked the cathedral’s eventful history from Antiquity to the present day.

Gallo-Roman remains found beneath the cathedral are evidence that Chartres was a population centre in the Late Antiquity. As far as its Christian origins are concerned, there is written evidence of the presence of a bishop in Chartres dating back to 343 CE. There was a cathedral in Chartres in the 4th century, which indicates that Christianity was already well established in the region at the time. This cathedral was replaced by a Merovingian place of worship, which was in turn destroyed by the duke of Aquitaine in 743. History was tragically to be repeated when the rebuilt cathedral was destroyed during Viking raids in 857. Nineteen years later, in 876, an important event occurred that was to determine the history of the cathedral: Charles the Bald donated the relic of the veil of the Virgin to Chartres. The building was restored to create a new home for this precious gift. The city was again besieged by the Normans under Rollon in 911. This was followed by two more fires, in 962 and 1020. The archaeological remains of all these buildings are difficult to analyse. A central-plan hemicycle situated beneath the apse of today’s cathedral, known as the Vault of St Leobinus, is thought by some to have been the original Carolingian place of worship. 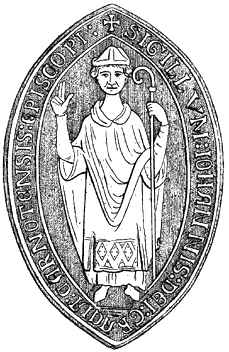 In the 11th century the cathedral’s history entered a more peaceful period. The city expanded and prosperity returned to Chartres, with tanneries becoming established in the suburbs. The famous Beauce wheat brought wealth to the region. The renowned theologian and philosopher Bishop Fulbert, regarded by some as the new Socrates, paved the way for a renaissance of the city. Following the fire of 1020, he built a new cathedral of extraordinary dimensions for its time, being the same width as today’s cathedral. Fulbert was keen for Chartres to have a cathedral that would attract pilgrims, giving it a new, higher status. The building work was completed quickly: by 1028, the year of Fulbert’s death, the cathedral was well under way. It was completed in 1037 by his successor, Thierry.

Fulbert venerated the Virgin Mary, and to encourage this veneration among his congregation he had a statue of Mary carved out of dark pearwood (from which the name Black Madonna derives) for display in the crypt. This resulted in a proliferation of magnificent figures of the Virgin in majesty in Marian sanctuaries, reliquary statues before which believers could pray. This Madonna, destroyed during the French Revolution, was to become the emblem of Chartres, later featuring all around the cathedral in stained-glass windows and sculptures.

A school of theology and philosophy developed among the cathedral canons and these philosophers acquired great fame, giving Chartres a prestigious reputation. They were called Bernard or Thierry and were Humanists, well versed in the writings of Plato and Greek philosophy. The cult of the Virgin Mary continued to grow and the pilgrimage gained greater importance. Brilliant bishops such as John of Salisbury and Peter of Celle later maintained Chartres’ position among the capitals of religious philosophy.

Extend the visit of the site Chartres sanctuary of the World by the free reading of the Letter to the donors and the people impassioned by the cathedral and the history of its restoration! Six pages, rich in unpublished articles and projects.
9d8cdc845d8b21924af4faf94ad50e9d~~~~~~~~~~~~~~~~~~~~~~~~~~