Faced with this abundance of images of such complexity, one can be forgiven for wondering who would have understood the message that the windows portrayed. It should not be forgotten that the Middle Ages were a time of all-pervasive Christian culture alien to us now. Whereas today we require explanations and commentaries, the people of that time would have instantly understood the meaning behind these images, with which they were familiar because they had seen them elsewhere and which they understood because they listened to lengthy readings of the texts that inspired them during the daily liturgies they attended. The images painted on the stone and glass of medieval churches were there not so much to educate Christians as to praise God: these stained-glass windows are man’s message to God the Creator. They are images of celebration and prayer.

What’s more, the windows’ main function, even more important than sending a message, was to create an atmosphere, evoking the walls of Heavenly Jerusalem, described in the Apocalypse as garnished with precious stones. The myriad rays of coloured light sparkling on the stone were designed to surround the pilgrims with a symphony of colour worthy of the heavenly world. The cathedral was above all the place of celebration of the sacraments. The function of the images in the stained-glass windows was to echo the liturgy by providing a permanent visual reminder of the liturgical gestures and the texts read during the services. The cathedral contained also a large number of relics, not only the relic of the Virgin’s tunic but also relics of many saints, to whom altars were dedicated in different chapels. The pilgrims came to pray before these relics, and the images in the stained-glass windows supported this prayer by reminding the faithful of the key moments in the saints’ lives. 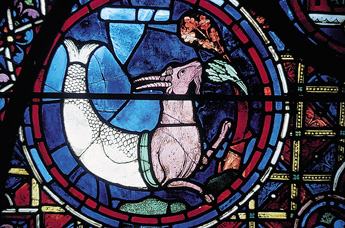