At a time when Suger was building a monumental three-portal entrance for the Abbey Church of St Denis, the temptation was to provide an equally imposing main façade for the cathedral at Chartres. The exact dates (probably before 1150), construction stages and function of the church’s west end have been the subject of much debate on which historians have yet to reach a consensus, other than the fact that it is unlikely that this construction was conceived as a whole from the start.

Be that as it may, this magnificent façade was a remarkable innovation in its day, with its two towers flanking the sculpted triple portal. The grand towers gave Fulbert’s cathedral a new solemnity and shape to the towering outline of the cathedral, visible from far away to pilgrims arriving across the Beauce plain. Between the two tall bell towers there were halls where the crowds would gather before beginning their procession, the towers being connected to the underground passageways in the crypt. The basilica’s west end therefore had many functions: to carry the sound of the bells far and wide, to add gravitas to the entrance, to provide a starting point for the pilgrimage liturgies, and also to display the main principles of the faith in the sculptures adorning it. These sculptures celebrate the mysteries of Christ, truly Man and truly God, his Incarnation, his Ascension and his Glorious Return. 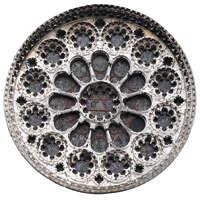 Beneath these sculptures evoking the threefold mystery of Christianity, the door splays are decorated with figures from the Old Testament: kings, prophets and patriarchs announcing the advent of Christ. This composite display brings together in one narrative both the Old and the New Testament, the Old Testament forming the foundation of the New. The representation is altered to bring across the message that the two covenants are complementary: stretched lengthways to fit the shape of the columns, the precursors of Christ form the foundation of the faith. The statues are carved from the same block of stone as the columns, making them an integral part of the architecture in a way that was to become the standard Gothic style in the region. The stretching of the figures helps to give them a supernatural air. With their stylised folds, rigid postures and grandly austere facial expressions of the figures they feature, fitting their surroundings so perfectly, these statue-columns clearly belong to the Romanesque style of the mid-12th century. And yet the figures’ serenity give an early indication of the calming influence of Gothic Humanism.

A capital frieze tells the story of the life of Christ, shown as a narrative: the animated story of his humanity contrasts with the majesty of the great figures featured in the tympanums. The tympanums depict the three great moments in the Mystery of the Salvation. In the centre, Christ reigns at the End of Time as described in the vision of the Apocalypse, enthroned between the four living things that are the symbols of the Evangelists: Matthew’s man, John’s eagle, Mark’s lion and Luke’s bull. On the lintel, the apostles are associated with the vision of eternity, while the angels and twenty-four Elders of the Apocalypse depicted on the arches give their acclamation.

In the right-hand tympanum, Mary is seated on the Throne of Wisdom between two angels in all Fulbert’s Romanesque majesty. The greatness of the Incarnation is praised in scenes from the Childhood of Christ displayed in two registers (the Annunciation, the Visitation, the Nativity, the Announcement to the Shepherds, and the Presentation at the Temple). At the time of his birth, the Passion is heralded: standing on the altar where he is presented, Christ takes part in his future sacrifice. All around this divine wisdom, depictions of human wisdom are featured on the arches. Continuing the custom from Antiquity, the liberal arts are portrayed in two groups: in the trivium, the allegory of dialectics is associated with the portrait of Aristotle, rhetoric with Cicero and grammar with Donatus. The quadrivium makes the connection between Boethius and arithmetic, Euclid and geometry, Ptolemy and astronomy and Pythagoras and music.

In the left-hand tympanum, the Ascension and the Descent of the Spirit are surrounded by the labours of the months and signs of the zodiac, references to the daily passing of time and of the role of human labour in Redemption. The twelve apostles are echoed by the twelve months and the four seasons by the four evangelists, with Christ in the centre bringing together the cosmos, the cycle of time and the labours of man.

Extend the visit of the site Chartres sanctuary of the World by the free reading of the Letter to the donors and the people impassioned by the cathedral and the history of its restoration! Six pages, rich in unpublished articles and projects.
4392a8b11655482457f165c5ba0b18ee>>>