Since the 13th century, the building has seen only a few alterations that have not impaired the magnificent coherence of its Gothic architecture:

During the Revolution the treasury was pillaged, the Romanesque statue of the Madonna was burned, many of the bas-reliefs were vandalised and the lead roof was removed and melted down.

In 1836, after restoration had begun, a fire destroyed the original wooden roof frame. The architect Baron designed a fireproof cast-iron roof truss roofed with copper plates, which remains today one of Chartres Cathedral’s distinguishing features. 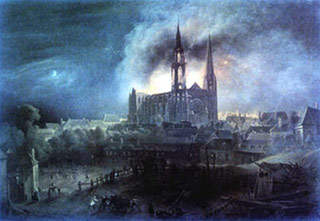 During the Second World War the stained-glass windows were removed as early as 1939 as a precaution, but the cathedral fortunately did not sustain any bomb damage. Today, eight centuries after it was rebuilt, this magnificent symbol of the mastery of space and light created by its Gothic builders continues to raise is proud profile high above the wheat fields of Beauce. After surviving the ravages of fires, storms, religious conflicts, the Revolution and countless wars, it today faces another menace: pollution, which represents a major threat to the cathedral.